Duchy Plant Hire’s Jamie Shelton bought his first Mercedes-Benz Arocs tipper in January 2021, because it was available and he needed a new truck in a hurry. Fast forward to today and he’s recently set another couple on the road, while Dealer Intercounty Truck & Van will be delivering six more early next year. 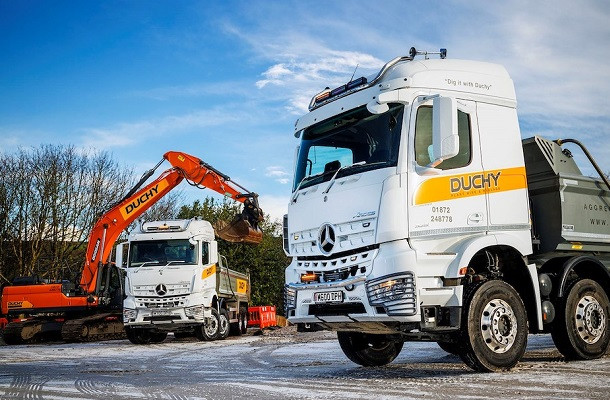 The Cornish operator’s decision to invest so heavily in the muscular Mercedes-Benz eight-wheeler owes everything to the exceptional performance of the original vehicle.

“That Arocs never gets stuck and is the most reliable truck on the fleet,” enthused Mr Shelton, who established his Truro-based business in 2018. “It’s every bit as capable as our Swedish-built trucks, yet they cost us upwards of £40,000 more. All we’ve had to do with our first Mercedes-Benz over the last couple of years is replace wear items.”

Duchy Plant Hire purchased this vehicle after Mr Shelton spotted it on Truck Sales Executive Matteo Mirabile’s Facebook page – the Arocs had been pre-built and was being offered for sale from stock by Intercounty Truck & Van. As a 3240 variant, it is powered by a 10.7-litre in-line six-cylinder engine producing 290 kW (394 hp).

However, in line with Duchy Plant Hire’ usual policy of running very highly specified equipment, the eight vehicles it has since ordered are all Arocs 3251s with 375 kW (510 hp) 12.8-litre ‘straight-sixes’. Their steel Predator Ultimate tipping bodies are being built by Abba Commercials, of St Helens.

Duchy Plant Hire specialises in aggregates and earth-moving, and is forging ahead strongly. In addition to its three Arocs, the company runs 16 other trucks, all of which are by the Swedish brands. The line-up includes tractor units and a beavertail-bodied eight-wheeler, but 8×4 tippers form the backbone of the fleet.

Hungry for growth Duchy Plant Hire is sending its vehicles further afield, into Devon and as far as Bristol, so day cabs are not always ideal. The two Arocs that recently entered service have StreamSpace sleepers with 2.3m widths.

One of these vehicles clocked-up more than 12,000 km in its first month, with the other not far behind. “Our latest Mercedes-Benz trucks are doing a brilliant job, and the fuel returns are astonishing,” declared Mr Shelton. “The new Arocs have been returning 9 mpg ‘straight out of the box’, which puts them a good couple of miles per gallon ahead of our other eight-wheeled tippers.

“The drivers have been blown away too, by their smooth power delivery and comfort. One has been in Swedish trucks all his working life but reckons the Arocs is the best he’s ever driven.”

Duchy Plant Hire does not hold back either, when it comes to the appearance of its trucks. Smartly finished at the Mercedes-Benz factory in Arctic White, with colour-coded bumpers and mirror housings, the Arocs then received additional paintwork in the UK – not only are their sun visors now also white, but so, too, are the wiper arms!

Of the six remaining Arocs currently in build at Abba Commercials, another two have StreamSpace cabs, while the other four have ClassicSpace M-cabs. However, rather than being conventional 8x4s, a couple of the ClassicSpace vehicles have been specified for optimum manoeuvrability in ENA configuration with single front steer axles, double-drive bogies and rear-steer axles. The resulting, tight turning circles will help drivers needing to access the many sites in Cornwall with restricted access.

If the Arocs has impressed, so, too, has the customer-focused service provided by Intercounty Truck & Van’s Matteo Mirabile. “Matt was very helpful when specifying our Arocs, but what’s really stood out is the way that he’s handled some difficult conversations,” explained Jamie Shelton.

“We’ve incurred a few delays with our new Arocs – this, of course, has been an issue afflicting the entire industry. Unlike the representatives of other manufacturers, though, Matt has been upfront throughout, so we’ve always known where we stand.

“If a delivery date goes back then I want to know about it as soon as possible, so I can make alternative arrangements. But if I’m left in the dark because people don’t want to give me bad news, it’s only going to cause me a bigger problem further down the line.

“Matt’s open and honest approach has been a breath of fresh air, which goes a long way towards explaining why we’ll continue to source our Mercedes-Benz chassis from Intercounty Truck & Van.”

Duchy Plant Hire is part of the well-established Duchy Group, which serves the construction sector – now 46, Mr Shelton was 19 when he started out with the family concern’s groundworks operation.

“Our success at Duchy Plant Hire is down to good old-fashioned, premium quality service,” he said. “We’re fully focused on compliance and on our Duty of Care, so, for example, we only take material to licensed tips. Our drivers are courteous and our trucks are cleaned every night – when they turn up on site they’re invariably gleaming, which sends all the right messages about our competence and professionalism.”