Estimator
Save the search
Create an email alert
FEATURING 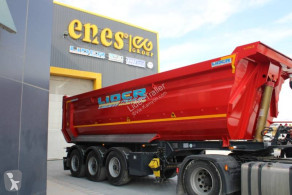 A vehicle for sale?
Post your ad in a few clicks!
I place my ad

Schmitz Cargobull, Krone, Fruehauf, Benalu, Kögel, Lecitrailer, Faymonville, Trailor
Semi Trailer A semi-trailer is a trailer whose front part rests on a road tractor. The semi-trailer is attached to the TRR with a fifth wheel located at the rear of it. The heavy goods vehicle consisting of a semi-trailer and a tractor is called a "tractor-trailer". When unhitched, the semi-trailer rests on the ground on two legs which can be operated hydraulically or manually. The semi can be fitted with one or more axles with single or twin wheels. On the gray card of a road semi-trailer, there is the indication SREM. There are also front-end semi-trailers (SRAT) of the dolly type, semi-trailers for combined transport (SRTC), for example container carriers for rail-road transport, and specialized semi-trailers (SRSP) of which the he use is other than the transport of goods (control semi-trailer, concrete pump, horse-drawn van, etc.). The bodies of the semi-trailers are the same as those of the trucks: tank for liquid products, tipper for non-volatile bulk products, refrigerator for perishable foodstuffs, PLSC for side unloading, etc. The moving floor semi-trailers are equipped a specific floor, the movement of which of the slats allows easy unloading of bulk products: potatoes, granules, sawdust, coal, etc. The semi-trailer has the advantage of being able to transport a greater volume than the trailer or the truck . Modeled on the principle of animal traction, the first vehicles bringing together a steam tractor and a semi-trailer were created at the end of the 19th century (Dion-Bouton then Thornycroft). They will be replaced by the first modern SREMs in the 1910s: August Charles Fruehauf delivers his first model in 1914. Browse used semi-trailers from the Schmitz, Fruehauf, Krone, Samro brands. Also check out the used TRR ads.
Planet-Trucks.com is a classified website of used, new or damaged trucks

A marketplace between buyers and sellers (buy and sell / leasing) from the truck and haulage business.

Other Websites of the Group: