Fast-growing PAV Haulage turned once again to trusted Dealer Motus Truck & Van for another pair of top-quality, pre-owned Actros tractor units – in a new departure, though, they were supplied under the Mercedes-Benz Certified banner. 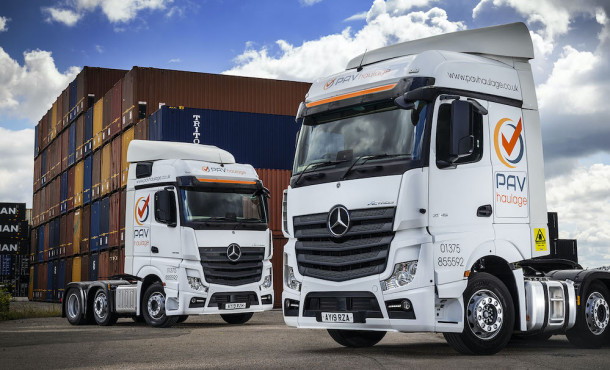 PAV Haulage provides container transport services from its base at the port of Tilbury, and from the nearby London Gateway and London Cobelfret terminals.

The company runs 22 trucks, all but five of which wear three-pointed stars. The fleet includes a number of vehicles that PAV Haulage acquired from new, among them its first two Actros, which were delivered by Motus Truck & Van in 2019.

However, the operator also appreciates the value and quality of the eight used Actros it has since purchased from the same Dealer. The latest of these, which are both fourth-generation Actros 2545 variants, came with a reassuring ‘stamp of quality’ from the recently-launched Mercedes-Benz Certified programme.

Also first registered in 2019, these vehicles returned to Motus Truck & Van on reaching the end of their contract hire terms with a major fleet operator, and had each covered approximately 300,000 km.

Launched earlier this year, Mercedes-Benz Certified provides buyers with access to the industry’s finest pre-owned trucks and support packages, and has raised the bar in terms of customer confidence.

Like every truck offered through the scheme, PAV Haulage’s units underwent an intensive, multi-point inspection by expert technicians at the Wentworth Park complex near Barnsley, which is home to Mercedes-Benz Trucks UK’s remarketing operation.

No truck offered for sale under the Certified banner will be more than five-and-a-half years old, or have covered in excess of 550,000 km. The first service will not be due for at least 20,000 km and tyres will have a tread depth of no less than 6mm. It will also be at least five months before the vehicle requires an MOT test and the manufacturer’s warranty will be valid for a minimum of 12 months.

PAV Haulage was established in 2014 by Pavel Ciubotaru. It was running seven Swedish-built trucks when Dean Mills joined him as a partner in the business four years later.

Mr Mills, who has worked for a couple of the biggest ‘players’ in the container transport sector, reported:

“We’ve been extremely busy for some time now and continue to grow the customer portfolio. It’s essential, therefore, that our trucks don’t let us down, because unplanned downtime is an absolute killer.

Whether we’ve acquired them from new or through Mercedes-Benz Trucks’ official used vehicle programme, our Actros have proved fantastically reliable, as well as being cost-effective to run and well-liked by the drivers.

The Dealer’s Used Truck Sales Specialist Steve Jenkins provides a fantastic service. He keeps us up to date on the progress of our orders and will always call if he sees a vehicle in which he thinks we might be interested.

We’ve come to view Steve as a trusted partner. His contribution, together with the quality checks they go through, and the manufacturer’s warranties they come with, gives us complete peace of mind when we buy a premium quality used vehicle from Motus Truck & Van.”

In line with its usual policy, PAV Haulage’s latest trucks are the subject of contract hire agreements with Mercedes-Benz Finance. Dean Mills said:

“We like this acquisition method because it allows us to budget with confidence, knowing there are no nasty surprises waiting to jump out at us.

We also have a great relationship with the brilliant team at the Dealer’s workshop in West Thurrock. Their efficient, flexible back-up ensures that we’re able to keep the fleet running smoothly, 24 hours a day, seven days a week.”