Presented for the first time to a large audience at the IAA Transportation 2022, the future large-series eTruck from MAN is taking significant steps towards the future: it is prepared for the coming megawatt charging standard and is therefore suitable for heavy long-distance transport, but also covers all regional and distribution transport services provided by diesel trucks today. Whether green steel for industry or organic milk for the supermarket: with the MAN eTruck, transport becomes sustainable and CO2-free. 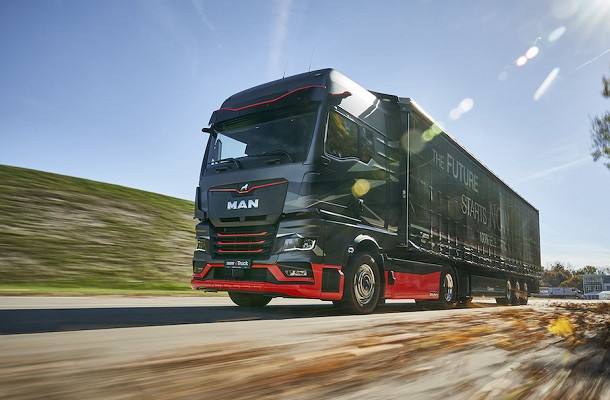 Compared to a diesel truck in long-distance transport with an average consumption of 27 litres, a single electric truck can save up to 100 tonnes of CO2 per year over 120,000 kilometres. And the transport companies also benefit, because the electric truck uses the energy used much more efficiently, saving up to 7.000 euros per year in comparison. MAN has now made the first public test drives of the new eTruck possible as part of the MAN eMobility Experience.

“Our new eTruck will electrify long-distance transport from 2024. MAN will then be driving electrically and CO2-free in all product areas – from vans to city buses and distribution trucks to heavy long-distance trucks. At the IAA we opened the order book for the first batch of the new eTruck and there are many interested parties! Our truck comes just at the right time.

From the middle of the decade it will be more economical to drive battery-electric than conventional diesel. By 2030, half of our vehicles sold in the EU should have zero-emission drive systems. But for this to happen, the charging infrastructure must be there, in Germany and in Europe. Today, the German Federal Government adopted the Charging Infrastructure Master Plan II – for the first time, it also includes the development of charging infrastructure for battery-electric trucks. This is an important first step, but the targets for charging stations and the required space and energy need to be more concrete.”

The future-oriented electric lion, which will roll to the first customers in 2024, is already prepared for future megawatt charging. Thanks to its high charging capacity and short charging times, this makes the new eTruck suitable for heavy-duty long-distance transport with a daily range of between 600 and 800 kilometres, and in the future even up to 1,000 kilometres. Together with low operating costs and an energy utilisation from tank to wheel that is about twice as efficient as compared to today’s combustion engine trucks but also to fuel cell trucks, battery electric vehicles offer the most suitable technology for future CO2-free commercial vehicle fleets.

In terms of application diversity and possible body concepts, the future MAN eTruck is in no way inferior to today’s diesel trucks, but is CO2-free on the road: whether as a classic articulated truck in long-distance transport of refrigerated foodstuffs, as a manoeuvrable 3-axle chassis in low-noise and exhaust-free waste disposal in the city, or in the all-electric transport of materials to the construction site with chassis and trailer.

MAN has already produced 20 prototypes of the future e-lion in its innovative eMobility Centre at the main plant in Munich. The planned future-oriented mixed series production with conventional trucks is thus already being tested under real conditions. The background: MAN has had the foresight to make its production more flexible for the ramp-up of electromobility in the heavy commercial vehicle segment, so that diesel or electric trucks can be manufactured on one line – despite different components, depending on the customer’s needs. The workforce is also prepared and to a large extent already trained for the new electric technology. By the end of 2023, all relevant skilled workers in truck production will be qualified for the series production of electric trucks.

In addition to funding from the Free State of Bavaria, investments are also being made in the MAN plant in Nuremberg. From 2025, around 100,000 battery packs are to be produced here annually in in-house large-scale series production.

The new MAN eTruck already uses the third generation of MAN action batteries. MAN gained extensive initial experience with the first generation in the small series of the MAN eTGM, which has now proven itself in everyday use by transport companies over 1.5 million kilometres in numerous European countries since 2019. With the second generation of batteries in the MAN Lion’s City E city bus, it was also possible to set a range record in practical use of over 550 kilometres with one battery charge. In addition to range, MAN’s battery development focuses on crash safety, durability as well as vibration and temperature resistance.

While the developers at MAN Truck & Bus are working hard to make the electric drive in trucks fit for all applications and uses in road haulage, the MAN Transport Solutions team is already preparing transport companies for this new era. Because a transformation is also required on the part of the users on the way to the eTruck. The 360 degree eMobility Consulting supports them in this. In addition to advice on suitable vehicles, this also includes consideration of customer-specific operating conditions such as operating phases including cost optimisation, route analysis and fleet optimisation.

Through cooperation with partners ABB, Heliox and SBRS-Schaltbau, MAN Transport Solutions already offers the right charging infrastructure in addition to holistic consulting. In addition, digital tools such as the new MAN eReadyCheck provide support. Since the IAA, customers have been able to use this to check how their delivery routes can be driven purely electrically. Another offer is the MAN eManager, which allows fleet managers to keep an eye on the important charging information of all trucks in the fleet at all times.

As part of product development, MAN is involved in central support projects for charging technology for heavy-duty electric trucks. One of these is “HoLa” (high-performance charging in long-distance truck transport), which is investigating the design, installation and operation of high-performance truck charging stations using four pilot locations along the A2 federal motorway. The “NEFTON” project (Commercial Vehicle Electrification for Transport Sector Optimised Network Connection) focuses more strongly on the development of charging technology.

Together with partners from science and industry, MAN Truck & Bus is analysing the system consisting of a fully electric truck, charging station and network connection as well as their design for various use cases in long-distance transport. The central aim of NEFTON is to demonstrate MAN’s Megawatt Charging System (MCS) with a charging capacity of over 2 megawatts. This is intended to test the newly specified MCS charging standard at an early stage. Bidirectional charging in the megawatt range, through which the truck can additionally function as an energy storage device for the power grid, is also being investigated in the project.

Beyond charging technology and its application, MAN is also committed to the expansion of the charging infrastructure: the TRATON Group has founded a joint venture with other industry partners to jointly establish at least 1,700 high-performance charging points on or near motorways and logistics hubs throughout Europe. The partners are investing a total of 500 million euros for this purpose.

For the future full electrification of European long-distance transport, however, an effort by society as a whole is needed. According to estimates by the industry association ACEA, 42,000 charging stations are needed. This is why MAN welcomes the German government’s ‘charging’ master plan, which is to be adopted shortly. The traffic turnaround to CO2-free transport solutions in the commercial vehicle sector will only succeed together. Assuming 350,000 electric trucks on European roads by 2030, a charging capacity of 37 terawatt hours per year based on renewable energies would be required. This corresponds to the average annual power generation.